Millie the Magnificent and Mighty: A Mouse Tale of Redemption

Once upon a time there lived a field mouse named Millie.  Millie was the youngest of 15, and the smallest.  She had exceptionally long whiskers, bright eyes, and a sleek tail.  Millie was proudest, however, of her strength.  Even though she was the smallest in her litter, she called herself Millie the Magnificent and Mighty, and she spent most of her days demonstrating her awesome abilities to anyone who was willing to admire them.

One hot summer day, Millie was decidedly disappointed with the lack of interest in her athletic prowess.  No one in Whiskerville was the least bit interested in the way she could scale the fence on the north edge of town or jump on and off the tree stumps in the park.  Millie ran laps around the pond, but no one wanted to race.  She did back flips along the stone wall at the south edge of town, but no one applauded.  Dejected and discouraged, Millie dreaded her return to the nest without having made any new conquests or achieving any new reason to boast.

As the sun began to set, Millie began to make her way through the park.  Although there was no one to near, a careful ear would have heard her grumbling quietly to herself.  “I am the strongest mouse in Whiskerville.  I am the most special mouse my family has ever had.  I can do anything I want.  I am Millie the Magnificent and Mighty!”

The stars began to come out, and as Millie continued her hike home, she began to see lights from the human town on her left.  Millie had heard many warnings about humans—with their traps and their cats—from her parents, aunts and uncles, grand-parents, and great-grand-parents.  No one she knew had ever ventured through the woods and into that forbidden territory.

That’s when Millie knew what she would do.  She would be not only the strongest mouse in Whiskerville; she would be the bravest.  She would dash through the woods, quietly enter the human world, and snatch something to bring back as a souvenir to prove that she was Millie the Magnificent and Mighty indeed.

The night was still as Millie sped through the forest and skipped on stones to cross a small creek.  Suddenly she found herself in a lovely place.  Soft green grass surrounded her.  Lamps on posts cast a glow along a red brick path.  Millie found herself hopping lightly along a path that was still warm from the afternoon sun.

It was a beautiful place, and Millie began to think how foolish her friends and family were to avoid the habitations of people.  In her wonder, she even forgot about looking for a souvenir.  She was ready to explore.  Before long, she came to a silvery fence outlined by the light from the lamps.  Millie easily slipped through and found herself on a new, paler, rougher surface.  It wasn’t as nice as the path, but her attention was fixed on the shimmering lights just ahead.  She trotted ahead until she found herself at the edge of a beautiful, blue pool of water.  The lights of the lamps reflected on the water, dancing in its quiet movement.

“Just a little more and I will reach the water.”  And with that thought, Millie lost her balance and slipped into the pool.  At first, Millie was not alarmed.  After all, she was a superb swimmer, and the pool wasn’t that large.  Before long, however, Millie realized that she wasn’t big enough and strong enough to pull herself out of the water, and she was becoming as tired as she was wet.

Paddling desperately around the pool, Millie came upon a small strange white object floating on the water.  Using the final shred of her energy, Millie rolled herself on top of the object and lay there gasping for air.  She was safe, for the moment, but she had no way to remove herself from her predicament.

It was a long night for Millie.  She shivered with the cold until her fur dried.  She became hungrier and hungrier.  She thought about her family’s cozy nest and the neighborhood mouse games that she always rejected with disdain.  She was feeling anything but magnificent and mighty.

Finally, morning came and the sun rose, illuminating Millie stranded on her little white island in the middle of the pool.  Two dogs ran by, fortunately more interested in a squirrel in a tree than in her.  Millie used all her strength, but she just could not move her little boat closer to the edge of the pool.  She was stuck—a hungry, tired, and frightened little mouse.

And so she was when the human walked through the gate and started to work near the pool edge.  As she turned toward the water, the human noticed Millie perched on the pool thermometer.  She looked long and chuckled, much to Millie’s discomfort.  Before too long, the human went away and returned with a net on a long stick. Carefully and gently, she scooped up Millie and her leaf, walked to the creek, and deposited Millie on the other side with a soft plop.

Millie’s legs started to move the instant they hit the ground, and they didn’t stop until she was at home in the nest, munching on a berry before taking a long nap.  She never told anyone about her adventure, but she stopped calling herself Millie the Magnificent and Mighty.  Her family and the mice of Whiskerville began to call her Millie the Modest and Mild-Mannered.

And Millie lived merrily ever after. 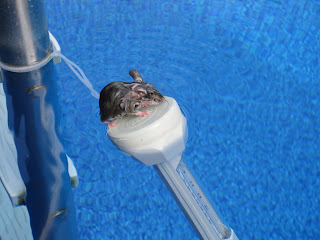